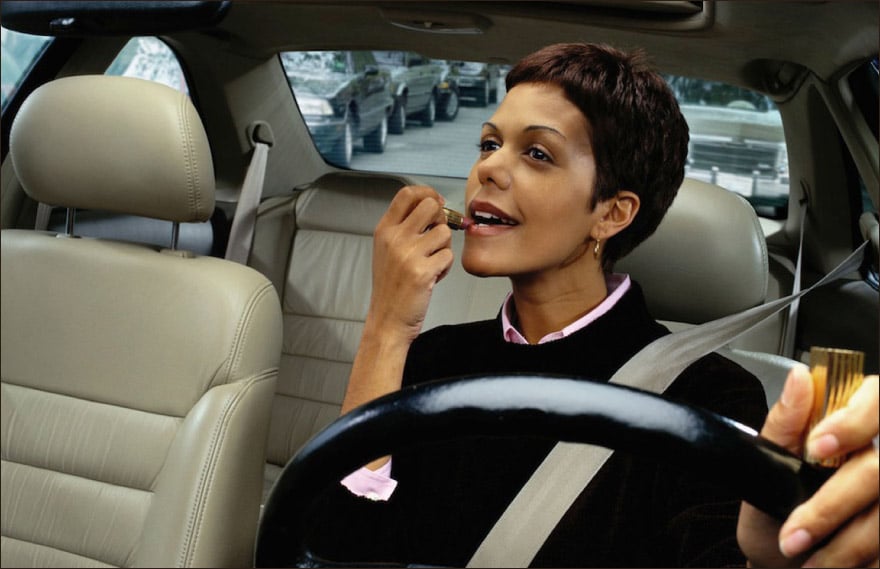 It is 7 a.m. and the woman in front of you is swerving her car as she attempts to put on makeup, and change lanes at the same time.

The idiot behind you is honking his horn, and screaming profanities at other drivers, as if he’s the only one with somewhere to be.

But, the guy with the morning paper stretched out across the steering wheel, who is blowing puffs of smoke out the window and reading while driving might actually be the more dangerous of the three. While you are asking yourself how any of these jokers ever obtained a license, you start to think about all the distractions drivers have to put up with today.

10. Read The Warning Label On Your Meds!

Look, when it says, “Not safe to drive while using xyz medication”, please take that warning seriously. Falling asleep at the wheel is not cool. It’s hard to pay attention to the road when a person is preoccupied with dreaming while their eyes are shut at 45 miles per hour in a 30 mile an hour zone.

Some dogs simply have no business being in the car while it is moving. How can a person possibly be paying attention to the road, when they are being licked in the face, lunged at, jumped on, and beat across the face with a wagging tail? One well-placed slap of the tail to the eye is all it would take to make the situation more dangerous than the unsuspecting driver ever anticipated.

If the person in the next car is looking like they are having some sort of convulsive episode while slapping at their head and then their windshield, it is possible that they are trying to avoid getting stung by the yellow jacket that just flew through their window. It’s hard to convince people in a panic that it is better to remain calm, be stung, and actually maintain control of the car than to cause a six car pile up on the way home from work.

If you think people driving while drunk is a distraction, you haven’t been in the passenger seat when someone sucks liquid down their wind pipe. It is a common thing to happen to people when they drive. And they instinctively follow the urge to take their hands off the wheel and put them over their head to help clear their air way. However, it might be better to keep one hand on the wheel until you carefully maneuver the car off the road so that you can finish choking and coughing without putting anyone else’s life in danger.

It would be nice that when a cop pulls you over for your kids fighting and screaming in the back seat, if the cop would give them the ticket instead of the driver. Then they would have to show up in traffic court and explain to the judge why they were being brats and putting everyone else’s lives in danger.

Sometimes, it is hard to resist flipping other drivers off and yelling at the top of your lungs when someone cuts you off. But an organic morning coffee and a healthy dose of B-complex every day sure can cure the grumpies before getting behind the wheel. Or, car pooling is another great alternative, provided that the person you are riding with does not have a problem with road rage.

As driving distractions go, texting while driving is pretty dangerous. You are not looking at the road, your hands are off the wheel, and you probably didn’t even notice that your car swerved across the yellow line into on coming traffic.

Who was the bright spark that thought it would be cool to install red light cameras at intersections and why was this individual not strung up by their ankles again? Then to add insult to injury, they shorten the duration of the yellow light to ensure that unsuspecting drivers will slam on their brakes hard and cause a rear end collision in an attempt to avoid getting a ticket. Is it not safer to just let people run the red light in a lot of cases, such as when there is no cross traffic? Now, when you get a red light ticket, they tack on an additional fee they say will be donated to brain injury research. Is that tax deductible? Inquiring minds want to know.

2. Watch Out Grandma Is Behind The Wheel

These eighty-year-old half blind grandmothers that think they need a souped up muscle car, when they can barely see over the dash. Just do everyone a favor and take their keys and license before those of us who use the sidewalks get hurt.

If there is any driver on the road who is more unsafe, it’s got to be that crazy nut job driving the meat wagon. For starters, no one knows where he is coming from until he is right on your bumper. Then he lays on the horn as he is swerving all over the place and weaving in and out of traffic at a minimum speed of 80 miles per hour. Is this guy trying to save lives or just run over anything that crosses his path? Surely there has to be a better way to transport injured people to the hospital.

There you have it, the top ten distractions that makes driving such a dangerous daily habit. It is certainly enough to make pedestrians like me fear for my life every time I leave my house. I have my Boca Raton personal injury lawyer is on speed dial. Just keep your car off the sidewalk, okay?